Fasting Testimony During Visit to Kenya 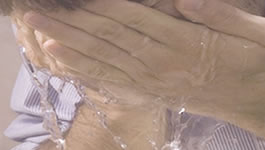 I want to share a testimony with you of a fast that two of my friends and me participated in on a trip to Nairobi Kenya. We went to Kenya to hold a four day crusade and a pastors' conference. Just before we left for Kenya there had been some conflict and bombings at some meetings in Kenya and some Christians had been wounded. The week before we left I had received an email from the US State Department recommending US citizens to cancel any trips planned to Kenya during the same timeframe we were to be there. We all decided we would still go as the Lord had planned for us. When we arrived there were no indications of trouble and the local church leaders assured us everything was fine. They had security for us with cars in front of us and behind with Christian law enforcement officers carrying weapons.

On the first night of the crusade the security and local church leaders advised us not to mingle or go down into the crowd for prayer during the crusade. It was our custom to go down into the crowd at the end of each message and lay our own hands on those needing prayer. This was the way we wanted to love them and allow the anointing to flow. Mark 16:18 (KJV), '... they shall lay hands on the sick, and they shall recover.' The first night we followed their recommendation and did not go down into the crowd. We stood at the front edge of a seven foot high steel platform and held our hands over the crowd and prayed for them. There were thousands and thousands that attended that night and hundreds that came to the front that night for salvation and then for special prayer.

As we were led to the vehicles by the crusade security team, I received in my spirit a vision of a thick darkness hovering over the crusade platform and field area. As I looked up I saw a bright fiery light forming in the sky and coming quickly down into the darkness. I could see the bright fiery light dispelling the darkness revealing the platform and expanding to include the field area. When we arrived at the vehicles and sat down in the back I asked my two friends what they thought of the first meeting. We three trust each other very much and know that each of us have insights into the spiritual realm. They both began to tell of receiving the same thing about darkness over the area, but a light came and the darkness left. We were excited, because we knew God wanted something different for the remaining three nights. Also, we knew things would have been different and better if we had followed our normal routine of going into the crowd.

While travelling back to the hotel we agreed to fast the next day to see what the Lord wanted us to do for the next three nights. The next day during the fast and our prayer time together the Holy Spirit was revealing that He wanted us to follow our normal routine. We agreed to tell the local leaders and the security that we were going down into the crowd. It was when this decision was made that we saw the bright fiery light again and the darkness was totally dispelled. We knew that this night was going to be different and would only get better.

When the team arrived at our hotel to pick us up, we announced that we were going down into the crowd after that night's message. They saw that we were adamant about our decision and agreed with us since they were convinced we knew this is what we were to do. When we arrived on the field, the atmosphere seemed different. The crowd was larger and we had just learned that a Muslim man had been born again the night before. The Muslim man was allowed to give a testimony of his experience with Jesus since the night before. His testimony was good and it sparked the crowd into a new level of excitement. After the message hundreds and hundreds came to give their hearts to Jesus and receive the gift of salvation. When the call was made for special prayer, it was announced that we were going down to meet the people. With the organizational assistance of the interpreters, we had three lines and it was a night of healings and miracles like you would expect at these types of meetings. The other two nights were even better. We shared our fasting experience with the local church leaders and the security team. That second night those local leaders learned that fasting is powerful and that God is a protector of His people.